SES has a proven track record delivering projects where White Clawed Crayfish Ecological surveys and mitigation is required. Pride and diligence is taken to meet client’s ecological obligations and commercial needs in a cost effective and pragmatic way.

SES also has a specialist in house implementation team with expert ecological surveying training allowing them to carry out works on sensitive sites. The SES team has experience creating and enhancing White-clawed Crayfish habitat through the installation of rough stone walls and the planting of bank side vegetation. 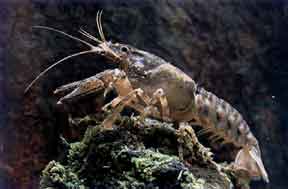 The White-clawed Crayfish is the only native crayfish species to the UK; however a number of non-native species of crayfish have now established themselves within British waterways; the most common and significant being The Signal or American crayfish (Pacifastacus leniusculus).

The White-clawed crayfish can grow up to 12cm in length and live for 7 to 12 years in the wild. They are olive brown in colour with a near smooth body and get their name from their off white to pink colour of the undersides of their claws.

White-clawed Crayfish have numerous predators from a young age and when they reach adulthood. Young crayfish are predated by fish, birds and invertebrates such as dragon flies and insect larvae. Adult crayfish suffer predation from herons and various types of mammals; due this large number of predators White-clawed crayfish are mainly nocturnal in order to minimise their risk. The non- native signal crayfish is a major threat as they can out compete White-clawed crayfish due to their size (up to 30cm) and very aggressive nature. Signal crayfish carry a dual threat as they also carry a fungal plague called aphanomyces (Aphanomyces astaci) or crayfish plague which has little or no effect on the Signal Crayfish but can have catastrophic effects on White-clawed crayfish populations within just days of exposure. Crayfish plague can also be transported from polluted areas via water, mud, fish and equipment.

White-clawed crayfish activity varies throughout the year with very low periods in winter when they enter a state of torpor (hibernation like) mainly concealed away in borrows. Conversely they are most active throughout the summer generally between July and September. White-clawed crayfish mate in the autumn to early winter (around September to November) with their eggs developing on the females tail and remaining attached even after the eggs have hatched which normally takes place at the beginning of summer. Juveniles are usually released from the tail of the female around June but this may vary due to geographical location and temperature.

White-clawed Crayfish are protected under section 9(1) & 9(5) of the Wildlife and Countryside Act 1981 (as amended) which makes it a criminal offence to:

Their inclusion on the Habitats Directive allows areas to be designated as Special Areas of Conservation (SAC) for the presence of white-clawed crayfish. Such a designation brings legal protection under the Conservation of Habitats Regulations (2010) to the management and development that can occur in and in proximity to these sites.

.The maximum fine per offence is £5000 the Countryside and Rights of Way Act 2000 amendment contains a provision for a custodial sentence of up to 6 months instead of, or in addition to, a fine. Along with a lengthy development delay until an appropriate mitigation programme has been agreed and completed.

The Natural Environment and Rural Communities Act 2006 (NERC) also lists white- clawed crayfish as species of principle importance under Section 41 and Section 40 requires every public body in the exercising of its functions (in relation Section 41 species) ‘have regard, so far as is consistent with the proper exercise of those functions, to the purpose of conserving biodiversity’.

In addition, local authority planning departments should also meet the requirements of chapter 11: Conserving and enhancing the natural environment, of the Nation Planning Policy Framework (2012); which requires planners to not only protect biodiversity, but where possible to enhance. Obligations under planning policy represent a ‘material consideration’ to the local planning authority with ecological survey being required before planning permission can be granted.

Due to the threat from non-native Crayfish species legislation has been produced to prevent them escaping captivity.

Surveys should be undertaken between July to September, a number of survey methods can be employed these include:

We have become renowned by our clients for our pragmatic, solution based approach to consultancy.

Working alongside our in-house arboricultural and ecological contracting teams we can take a project from initial advice and planning to design and implementation on site.