Dormouse Muscardinus avellanarius populations have declined significantly as a result of changes in woodland management and over grazing of woodland. A detailed ecological dormouse survey of suitable habitats is usually required before planning permission can be granted.

SES ecologists have the necessary experience that is legally required by Natural England to survey for dormice and have successfully completed licensed mitigation works.

SES also has a specialist in house implementation team with expert ecological training allowing them to carry out works on sensitive sites. With experience in supplying and installing nest boxes, scrub and selective tree lopping and felling, vegetation clearance and habitat creation through plantation and habitat linkage. 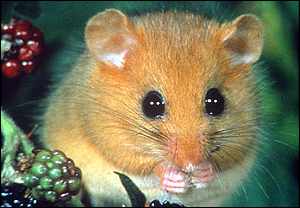 The dormouse is distinguished from other small rodents by its black, protruding eyes, thick furry tail and sandy-coloured fur. The dormouse is often known as the hazel or common dormouse, and is mainly confined to Southern England. Dormice are generally nocturnal and arboreal and requires woodland and well developed scrub with good links to other areas of habitat so that they can travel without coming into contact with the ground. They require a diverse range of food to ensure a continuous food supply from when emerge from their nests from May until they return to hibernation around October/November; this food supply consists of berries and nuts such as blackberry, hawthorn, hazel, guilder-rose, blackthorn and field maple.

A Dormouse’s optimal habitat is ancient semi-natural woodland that is lightly managed i.e. a long coppice cycle that have excellent links through hedgerows and woodland strips. The dormouse builds nests from honeysuckle, hazel leaves and woven grass which can be found at a range of heights from low scrub to high up in the canopy. Dormice usually breed twice a year giving birth to around 4 young which are independent at about 2 months with dormice surviving up to 6 years and living at a maximum density of about 8-10 animals per hectare in good habitat.

Dormouse populations have declined significantly as a result of changes in woodland management and over grazing of woodland leading to loss of food sources and fragmentation of habitats with gaps of 100m leading to colonies being prone to genetic isolation and extinction. The planning permission of new developments is subject to the outcome of a dormouse survey and appropriate mitigation scheme.

Dormouse, therefore are afforded strict legal protection through UK and European law. The dormouse is listed on schedule 5 of the Wildlife and Countryside Act 1981 (as amended) and protected under regulation 41 of the Conservation of Habitats and Species Regulations 2010 Taken together it is illegal to:

The maximum fine per offence is £5000 the Countryside and Rights of Way Act 2000 (CRoW) amendment contains a provision for a custodial sentence of up to 6 months instead of, or in addition to, a fine. Along with a lengthy development delay until an appropriate mitigation programme has been agreed and completed.

The Natural Environment and Rural Communities Act 2006 (NERC) also lists dormice as a species of principle importance under Section 41 and Section 40 requires every public body in the exercising of its functions to ‘have regard, so far as is consistent with the proper exercise of those functions, to the purpose of conserving biodiversity (all biodiversity and not just section 41 species and habitats)’ ; therefore making the dormouse a material consideration in the planning process and requiring a detailed ecological survey before planning permission can be granted. In addition, local authority planning departments will use the section 41 species to meet the requirements of chapter 11: Conserving and enhancing the natural environment, of the Nation Planning Policy Framework; which requires planners not only to protect biodiversity, but where possible to enhance it.

Because of the strict protection for dormice all surveys in areas where the dormouse is known to be present requires a Natural England licence; except for nut search techniques.

There are a number of different survey techniques used to detect the presence of dormice, two of the most effective are:

1. A search for characteristically gnawed hazel nut shells; if hazel is abundant. This technique can be useful to quickly confirm presence, however a negative result is not enough on its own to determine absence.
2. If hazel is not abundant nest tubes can be installed and checked over a period of months between March and November.

A Natural England mitigation licence will be required if development works affect dormice or their habitats. These licences usually take one or two months to be approved. Trees or scrub known to be dormouse habitat should be marked and retained, if possible, with an SES ecologist in attendance to ensure the client operates in the most efficient manner, complying with the species strict legal protection.

If dormouse habitat loss is unavoidable mitigation will have to involve the replacement or a net increase of the habitat lost; this can be achieved through replanting and creating linking corridors of habitat to prevent fragmentation e.g. through hedgerows and dormouse corridors; it is also necessary to translocate Dormouse to new habitat where existing habitat is lost; these types of works must take place between May and October when dormice are active.

We have become renowned by our clients for our pragmatic, solution based approach to consultancy.

Working alongside our in-house arboricultural and ecological contracting teams we can take a project from initial advice and planning to design and implementation on site.